Home
HEALTH
basic bodybuilding exercise
Advertisement
Advertisement
Bodybuilding is a sport of building muscle. Diet and weight lifting exercises are the two main factors to focus on.
Anyone who is serious about building muscle should have a basic understanding of the different exercises. Using the proper techniques and knowing how each exercise works the muscles will get you stated down the right path.
The following is a list of specific exercises, each one with descriptions of how it’s performed and what muscles it works on.
Chest
1. Flat Bench Press
The bench press is a very basic and very popular exercise. It’s a compound exercise that works the deltoids, triceps, and upper back muscles in addition to the muscles in the chest. The bench press is performed laying down flat on a bench and facing upward. The weights are pushed straight up and away from the chest, then lowered back down to the chest to complete one repetition. Lifting with a wider grip on the bar involves a using more of the chest muscles.
2. Dips
This exercise focuses mainly on the triceps and lower chest muscles, and involves more muscles working together than the bench press. For this reason, many people are able to handle more weight when doing dips. Although forms can vary greatly, the way to do the basic dip is to suspend the body in between two sets of parallel bars. The body should be vertical and the knees bent to 90 degrees or more. From there, slowly lower the body as far as you can comfortably go, then push back up until the arms are straight again.
Changing the body’s angle and angle of the bars can work different muscles more intensely. Weight belts can also be worn to add more resistance if desired.
3. Incline Bench Press
This is very similar to the flat bench press, the difference being that the bench is set at an inclined angle instead of lying flat. In other words, the shoulders are sitting higher than the hips. This is a great exercise for the upper chest and anterior deltoids. Advertisement
Legs
1. Squats
Squats are the most common weight lifting exercise for the legs. Squats give the glutes the most intense workout, and also include the hamstrings, the lower back and the calves. They’re performed by setting the across the upper back, right below the neck. The hands grab and stabilize the bar from below. The repetitions go from a standing position, down to squatting position, and back up.
2. Deadlifts
A dead lift is a lift that starts with the weights resting on the floor. The weights should be gripped either with both hands facing down, or with one up and one down, alternating with each repetition. This is a compound exercise that works a large number of different muscles, including the quads, biceps, glutes, lats, lower back, trapezius, hamstrings and calves.
3. Leg Press
To do the leg press, one needs to use a specific weight machine. The trainer is seated with the legs pulled up and inward. The machine provides resistance as the leg are straightened and push forward before returning to their original position. This gives a good workout to the glutes, the hamstrings and the calves.
Back
It’s wise to wear weight belts with most exercises that require bending of the lower back. They can help prevent injury by reducing strain and giving extra support to the lower back.
1. Pull-ups
Pull-ups are performed by grabbing onto a horizontal bar above the head, bending the knees to keep off the floor, and pulling up with the arms until the chin comes to the top of the bar. It’s commonly done with both hands facing either forward or backward. The first exercises the forearms more, and the second works more on the biceps, while both work the upper back. Back-hand pull ups are also commonly known as chin-ups. Widening the grip will work the lats harder, and narrowing it will exercise the arm muscles more.
2. Bent-Over Rows
A bent-over row is done with the back bent and leaning forward. It is a repetition where a weight is lifted with the arm starting straight down, holing the weight in an overhand position. The weight is then lifted to chest height and lowered back down. This can be done using one arm at a time, or with both working together.
Biceps
1. Curls
A curl is a simple isolation exercise for the biceps where the weight is held with the hand facing upward. It can be done standing or seated, with one or both arms working. When the weight is lifted, the elbow should be the only joint in motion.
The preacher curl is a variation on the standard form, where the elbows rest on an inclined bench placed in front of the trainer. This helps stabilize the movement.
The hands face downward in the reverse curl, and hold the dumbbells vertically in the hammer curl.
Sitting on an inclined bench can generate more resistance and make for a more intense workout.
Triceps
1. Tricep Extensions
Also known as the French curl, this isolation exercise is performed by lowering a weight from above the head. The forearms should remain straight up and down at all times. Like the curls for the biceps, it can be done with the arms working together or independently. Extension lifts can be done standing, seated, or lying down. The third variation is referred to as the lying tricep extension.
2. Close Grip Bench Press
A variation of the standard bench press, the close grip form is done with the hands about shoulder width apart. This shifts the work from the pectorals to the triceps. Going any closer than this is not advised, as it can put great strain on the wrists.
Shoulders
1. Shoulder Press.
For the shoulder press, one holds the barbell in the same starting position as a squat, laying it across the top of the back. The trainer then lifts the weights by pushing the bar up with the hands. In the traditional form, one stands with the legs shoulder width apart, The Military Press is similar, except the standing position has the legs tight together. Both are great exercises for the deltoids, and they use the core and legs for stability.
0
SHARES
ShareTweetSubscribe
Advertisement
Tags: Workout Routines, Workouts 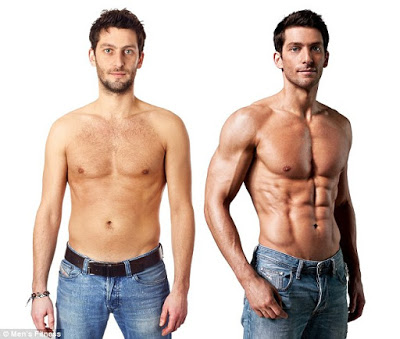 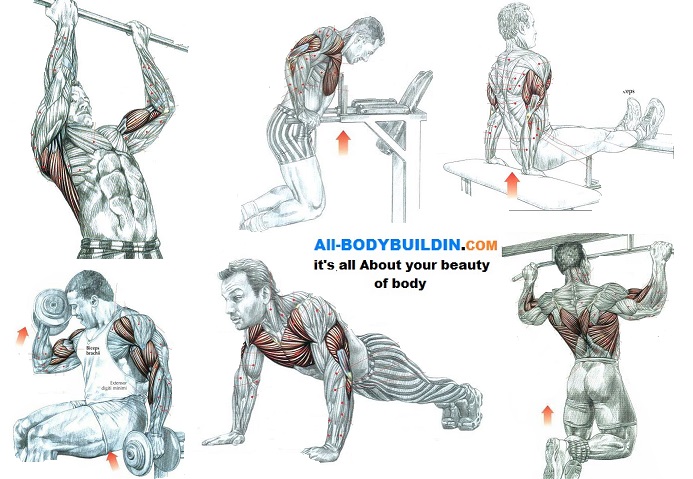